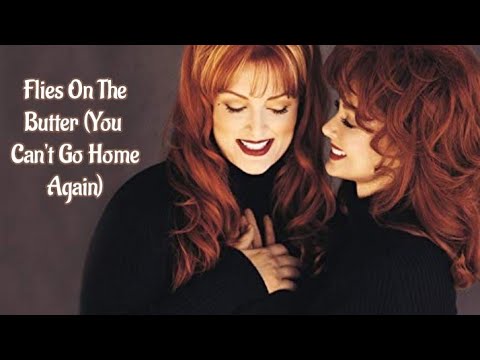 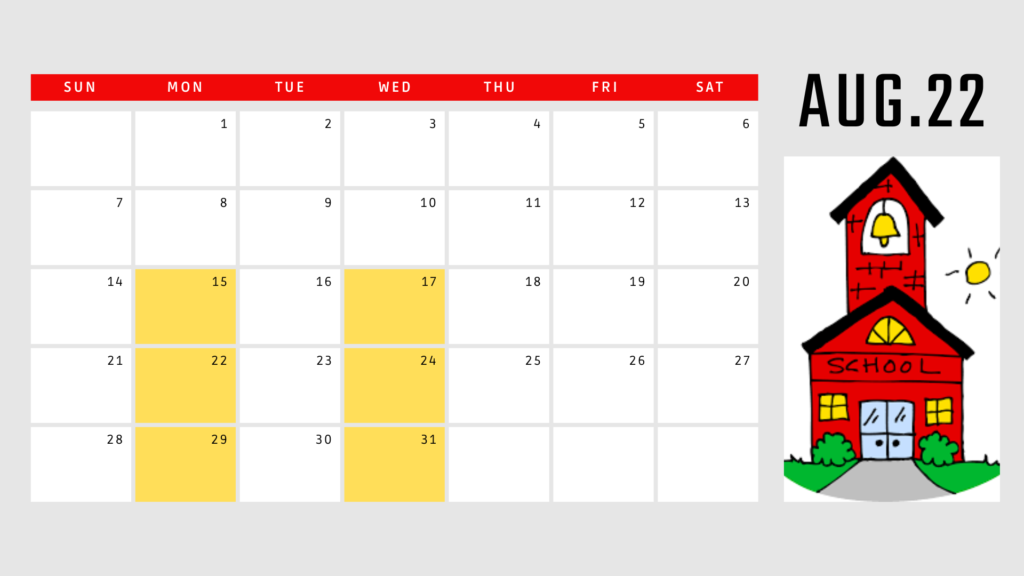 Let’s Look at Flies on the Butter as Literature

Assignment 1: WRITE the answers to the following questions:

Memories of Home are powerful forces–forces that we can never really escape.

“The past is never dead. It’s not even past.

”
― William Faulkner, Requiem for a Nun

Sometimes we have good memories of home and we try to rush back to that place of our memories, but sometimes, we want to escape those memories entirely. Whatever the case, our homes are good places to begin understanding what motivates us–what stories we need to tell.

Wynona’s lyrics are a nostalgic, sentimental memory of an old house. The fact that Wynona is a country singer helps her carry the mood and the theme of her words. Because country music often alludes to a simpler past and a sentimentalized time gone by, it appeals to many people.

Robert Frost conveys a similar feeling in his poem The Need of Being Versed in Country Things.

The Need of Being Versed in Country Things by Robert Frost

Assignment 1: Answer the Questions at the end of the two Frost poems The Need in Being Versed in Country Things and Birches.

Here’s Another Song about a House:

Our House
Lyrics by Helen Ready

Here’s Yet Another Song about a House:

House of the Rising Sun
by The Animals

There is a house way down in New Orleans
They call the Rising Sun
And it’s been the ruin of many a poor boy
And God I know I’m one
Mother was a tailor, yeah, yeah
Sewed my Levi jeans
My father was a gamblin’ man, yeah, yeah
Down, way down in New Orleans
Now the only thing a gamblin’ man ever needs
Is a suitcase, Lord, and a trunk
And the only time a fool like him is satisfied
Is when he’s all stone-cold drunk

Oh mother, tell your children
Not to do what I have done
Spend your lives in sin and misery
In the House of the Rising Sun

Well, I got one foot on the platform
The other foot on the train
I’m goin’ back to New Orleans
To wear that ball and chain

Well, there is a house in New Orleans
They call the Rising Sun
And it’s been the ruin of many a poor boy
And God, I know I’m one

That’s the Way I Always Heard It Should Be

Writing Assignment 1: Compare and Contrast the three Houses conveyed in the above 3 songs. What do the houses say about the people telling the story? Are houses always homes? Why or Why not? Write in full sentences. Copy-paste quotes from the songs to support your ideas. This writing assignment is due at the beginning of Class 2 [August 17] 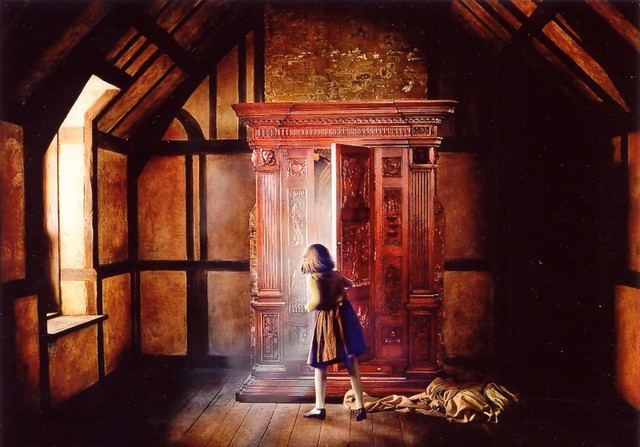 C. S. Lewis’s Chronicles of Narnia center around a closet in an old home in England. In reading a bit of Lewis’s autobiography, we might wonder if in describing that old, rambling house, Lewis was not describing one of his childhood homes:

C. S. Lewis said the following about one of his childhood homes:

“I am a product of long corridors, empty sunlit rooms, upstairs indoor silences, attics explored in solitude, distant noises of gurgling cisterns and pipes, and the noise of wind under the tiles. Also, of endless books. My father bought all the books he read and never got rid of any of them. There were books in the study, books in the drawing room, books in the cloakroom, books (two deep) in the great bookcase on the landing, books in a bedroom, books piled high as my shoulder in the cistern attic, books of all kinds reflecting every transient stage of my parents’ interest, books readable and unreadable, books suitable for a child and books most emphatically not. Nothing was forbidden me. In the seemingly endless rainy afternoons I took volume after volume from the shelves. I always had the same certainty of finding a book that was new to me as a man who walks into a field has of finding a new blade of grass.”

For the next couple of classes, we’ll talk about Home. We’ll begin by physically reconstructing one or more of our childhood homes.

The old movie  Mr. Blandings Builds His Dream House is a comedic look at the pitfalls of building a house. That process began with a floor plan.

Assignment 2: Draw a Floorplan of a house that you identify as a childhood home. This Floorplan is due at the beginning of Class 2. Your plan can be a simple sketch. It is not necessary that you even use a ruler. Just sketch it out.

Here is a floorplan of my grandparents’ home: 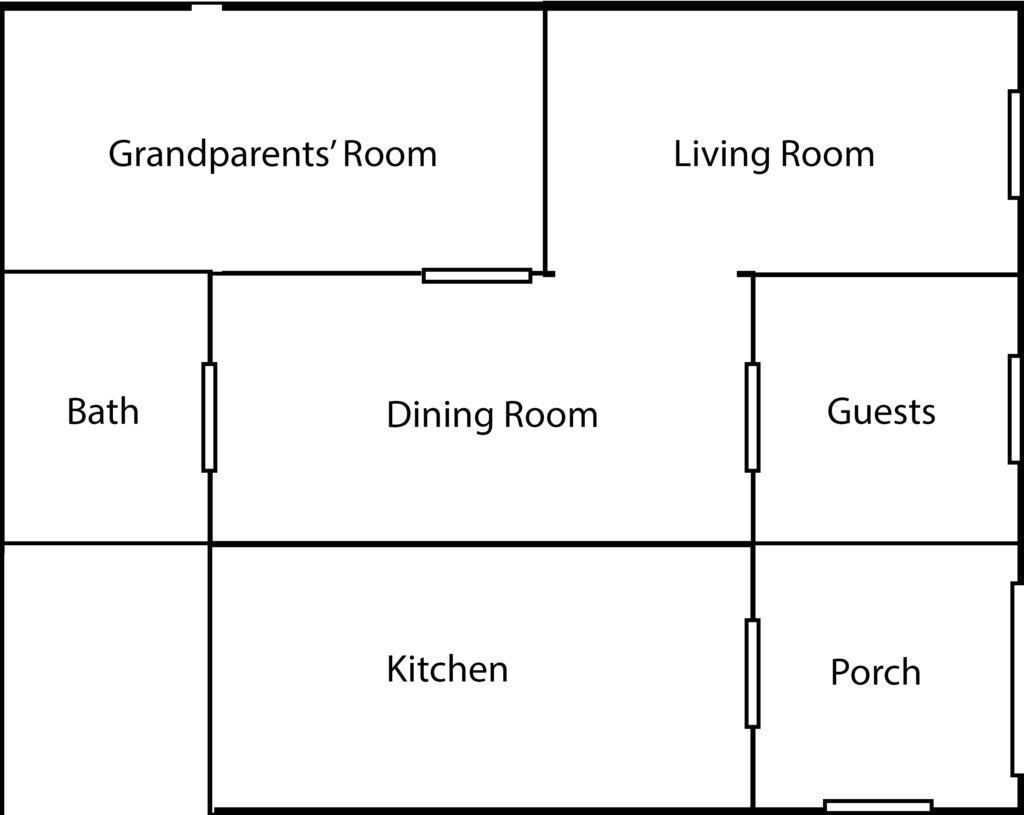 Read Soldier’s Home and answer the questions with full, detailed sentences: The answers to these questions are due at the beginning of Class 2.

Soldier’s Home by Ernest Hemingway – Focus on Setting. Character, and Themes in Literature

“If you don’t know where you want to go, then it doesn’t matter which path you take.”

In other words, if you don’t know where you’re going, don’t be surprised if you never get there.

Assignment 3: In Soldier’s Home, the narrator said that he needed some maps:

Draw a Map of a house that you identify as a childhood home. This map should show other important buildings and landmarks near your home–your neighborhood. The map of your childhood neighborhood is due at the beginning of Class 3 [August 22]

Here is a map of my childhood home: 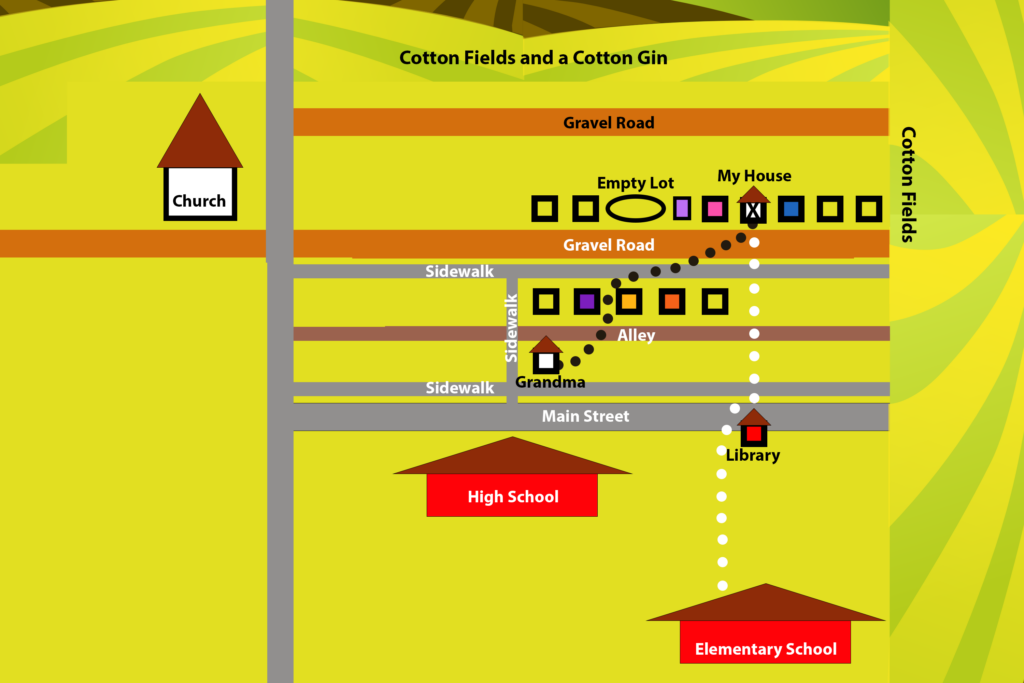 My actual house was situated on a gravel road that was a block behind my grandmother’s house, and my grandmother’s house was situated on Main Street, which was a blacktop road–one of the few paved roads in my little town at that time. My high school was across the street from my grandmother’s house, and my elementary school was behind my high school and a bit to the right of it. I always walked to school, and sometimes, I walked to my church, too, which was about 2 blocks away–but in the other direction. The farmlands–the cotton fields–were within eyesight of my house, in two directions.

My grandmother was an avid gardener, and  I walked to my grandmother’s house at least once every day, and when I did that, I would pass through the alley behind her yard first. That is where she grew fields of old-fashioned hollyhocks. As soon as I reached that field of hollyhocks, I knew that I had reached the safety that I felt in my grandmother’s yard.

Several feet and many flowers beyond the hollyhocks, I would soon arrive at the back steps of my grandmother’s house. In 2015, I captured that feeling in a short poem. Assignment 4: Look at the map of your childhood home’s neighborhood, and relate some of your memories about some of those places. This Assignment is due at the beginning of Class 4.

Assignment 5: Read Robert Frost’s Mending Wall. Follow the lesson step-by-step, and complete all of the writing assignments before Class 3: August 22. This assignment is due at the beginning of Class 3.

In a ritualistic fashion, two neighbors meet each spring to repair the wall that stands between their properties.

Please recall that Hemingway alluded to these repetitive behaviors as patterns. For people who are trying to escape their feelings or who are trying not to think, mindless, rote behavior is a coping device.

There is also an element of irony in this poem.

Assignment 7 Read the following blog post and Read Alice Walker’s story the Flowers. Follow the lesson step-by-step, and complete all of the writing assignments before Class 3:

The Flowers by Alice Walker – Focus on Plot

As you prepare this assignment, you will also be directed to the following post: